The most important trait to succeed in sales, and perhaps in life

Dave Kurlan recently highlighted one of his old posts on what makes for great sales people.  Surprisingly the best sales person doesn't necessarily have the best closing skills, or prospects consistently, or even builds the best relationships.  Rather it's the person who sells consultatively - i.e. asks insightful questions.  Dave's finding, based on thousands of OMG assessments is absolutely profound, but after a while I began to think what makes someone capable of asking these such questions and why doesn't everyone do it. 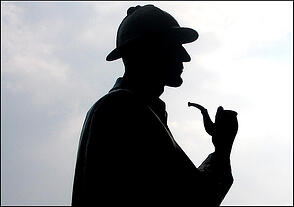 This question had been on mind mind for a while when, a few weeks ago, I was working on a deck and asked my colleague Pete Caputa for suggestions on slides that would make a point to the partner.  Pete uttered one a most memorable lines I can recall: "Don't educate. Identify need."

Pete's statement hit me like a brick.  While I had eschewed premature presentations and demos in the past I did so because I felt it was a crutch or could make discussions one-sided.  What I didn't realize is that even when I did present at the right time my content was more to educate than to ask questions of the prospect and identify pain.  Why did I feel the need to educate so much? [1]

My recent training with Rick Roberge has taught me that I choose to educate a prospect because it puts me in my comfort zone where I know a lot and can wow people.  But, while it can help with credibility it is a hit-or-miss approach in sales because your message may not resonate with the prospect.  If, instead, I made the focus of all my presentations to identify pain I would know better if I could help my prospect.  But this means stepping out of my comfort zone and that's only possible if I am confident even when in areas I have not been before, e.g. asking questions to learn the details of my prospect's business.

Confidence is, I believe, the real skill that underlies great sales people.  However, this isn't the stereotypical over-the-top arrogance you may think of but rather the quiet confidence that comes from not requiring anyone's approval and knowing you are as probably as good as the majority of the people you run into (caveat: in your specific role, after sufficient time and perhaps coaching).  [2]

Quiet confidence is what makes one a powerful listener and an excellent asker of questions.  Indeed, ever since I've learned about quiet confidence I've caught myself saying things in meetings or calls and thinking "wow, I'm really just saying that to remind people that I'm smart."  (yes, I know, pretty shallow but I suspect many of us are guilty of this if we stop and observe).  As soon as I stopped worrying about proving this to people I feel I gained respect through greater perceived and actual patience.  I even began to notice when I was being flattered unduly and when I was letting my emotions drive my reactions in a discussion.

Still the biggest benefit of quiet confidence is one I never imagined.  And it solved one of my biggest worries that has plagued me since I started my career - that of losing my job.  I remember envying Googler Steve Yegge after reading his post that he went into work at every day thinking he'd get fired and hence was prepared to speak boldly.  Despite my ostensibly strong credentials and good work track record I have never been at this state in any job.  There are loads of things that I could blame this on, not least of which is being an immigrant on a work visa, but the truth is that if I were confident of my abilities I would worry less and do better.  Well, I may be getting ahead of myself somewhat but I think I am closer now to where Steve is mentally.  Ok, let's hope I don't screw up now.

[1] To be fair, I think one needs to establish credibility with prospects.  But that can be done as much through great questions as through education.  It's hard to overdo the former so while focusing on this part the latter will happen naturally anyway and you need not plan for that.

[2] Rick once told me the story of when he met presidential candidate Mitt Romney and thought "well, he's certainly a smart guy and I can learn from him but I'm no dummy either and perhaps, if he has an open mind, he could learn a thing or two from me too."  I love this story because it's memorable and reminds me that all of us have unique life experiences and hence have something of value to contribute.