A while ago I realized that every job, for me at least, follows a similar pattern.  In the first year I subtract more value than I add as I learn the job and industry.  Those around me usually don't notice this and either give me the benefit of the doubt or feed my ego with praise.  Emotionally I'm excited by the new job and the steep learning curve.

In the second year I subtract about the same value as I add but the subtractions come in one or two colossal mistakes that nearly destroy me and a part of the firm.  If my boss has the patience to keep me around, and ideally provide some coaching, I go on to become far stronger at my job.  Emotionally the second year is the most challenging as I doubt myself almost constantly. 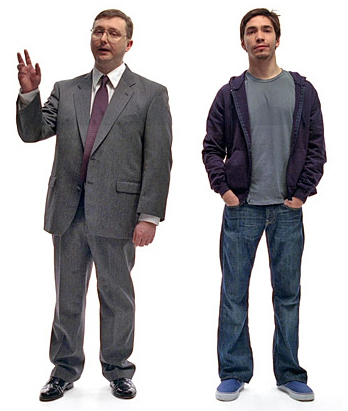 In years three to five I find my groove and add value consistently.  Emotionally I feel confident while still humble on learning the finer details that separate good from great.

I know the above pattern sounds much like Gartner's Hype Cycle but I'd like to believe mine is a little more useful.  Anyway, I'm currently in my second year at HubSpot.  And the above pattern remains unchanged.

This time around, however, the second year is more gut-wrenching than in the past.  The reason is my sales coaching is making me confront skill limitations that have existed for decades and hence are quite hard to fix.  There were so many shortcomings in my OMG assessment I sometimes wonder why my coach, Rick, stayed on to fix these things.  Or maybe he thought I was the ultimate challenge for him, who knows.

My assessment was frank in identifying several weaknesses I have, not just in selling skills but also in entrepreneurial skills.  But what I'm realizing now is that these skill limitations are really a proxy for various life skills I lack, or what people sometimes refer to as street smarts.

My parents have remarked in the past that I was not street smart but I didn't pay much heed to them as in my teens and twenties society valued book smarts far more.  So I studied hard, got degrees from top schools, and worked at companies with great brands.  But now I feel like I've gone as far as I can with book smarts alone and if I don't acquire street smarts I'm not going to have a very successful career, or maybe life itself.  Sounds dramatic?  I don't think so.

Coming to grips with such fundamental doubts about oneself is, I believe, at the heart of a midlife crisis.  I'm clearly exhibiting the other symptoms of such a crisis (see: recently ordered BMW, multiple shoe purchases - at the same time - from Zappos).  As guidance, Rick mentioned Gail Sheehy's book, Passages, that outlines the major challenges we experience in various decades of our lives.  The book seems an updated and expanded version of Hinduism's four stages of life, the ancient wisdom of which serves as a reminder that we all go through this phase.  So, while the transition is painful I know I'll make it through as we all do.  The question is, what lies on the other side?

One thought that I used to fret over is if this process ends with me realizing that my heart and real career calling lie elsewhere.  How on earth could I even consider a change at age 35, with a mortgage, family etc?  I've blogged about this before but there I left the question unanswered.  Recently I read two essays that give me hope about the finding my calling.

The first is the story of Albert Schweitzer.  Albert was born in 1875 in Germany and by his twenties had earned three PhDs in music, philosophy and theology.  He was a renowned professor as well as one of the world's greatest organists.  Then at age 30 he gave it all up, trained as a doctor and went to work in a leper hospital in Africa.  Years later he won the Nobel Peace Prize and continued working till he was 90.  His story is remarkable and offers two lessons.  First, it's never too late to change your career.  Second, following your career passion may help you live longer.

The second is a short essay by Moxie Marlinspike on how pursuing the worst in all material goods leads to a more fun and fulfilling life.  Lots of people talk about freeing themselves from material needs but Moxie's essay stuck with me when he said: we'd play outside more if we cared less about dirtying our fancy clothes and we'd ride our bikes more if they were crappy and we weren't worried about them getting scratched or stolen.  A life with the worst material possessions means you need so much less to live and yet you live so much better.

Let's see if I can put into practice what Albert and Moxie did.  Maybe I will realize Henry David Thoreau's wisdom when he said embracing the beauties of nature and of free time are the ultimate luxury.